First, I have to apologise for being late to write this post. Time has run away with me, I do not have an excuse apart from not realising the end of the month appeared. Maybe that is the reason we came here, to lose time or not take any notice of it.

Weather wise, July has been a hot one. We have avoided the European heatwave apparently, but it has still been hot, consistently hot, not below 30°C. This is just normal for Calabria with the hot lazy days of summer. We had a night-time thunderstorm and some wind but nothing too major but that was it. One day, I did burn though, I thought I was being very careful as I was sat on the terrace under the hard canopy in the shade all day, but I guess the UV bounced around and found me. So now there is a hard t-shirt line for me and I have to make sure I put on factor 50 on my now not so pale Irish skin. Thanks mum.

Scalea in July is great as more events take place. The main event was a procession where the statue of the Virgin Mary of Carmel (the patron saint of Scalea) is carried around the streets of Scalea and stops at certain places for people to say prayers. In front of that there were several people each carrying a wooden crate type thing that were decorated with flowers. The streets were decorated in large light arches and at the end of the night there was a huge firework display. Best I have seen in Scalea so far. So, this is an important event. 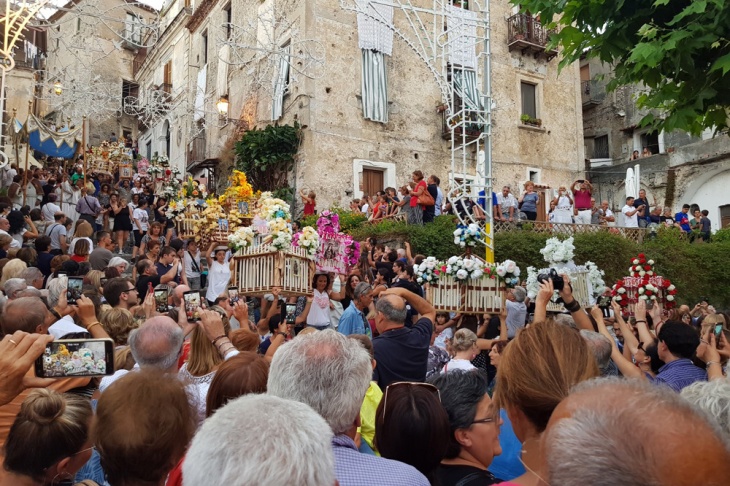 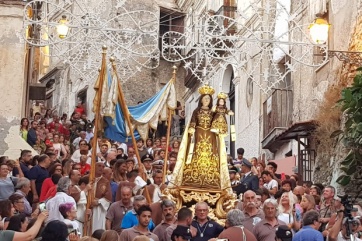 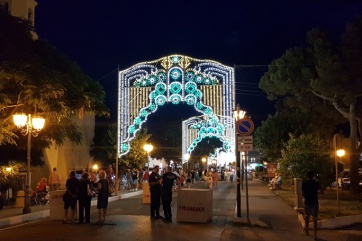 The arches of lights

A few days after the procession the arches were gone, which is a shame. It would have been nice to see those throughout the summer. But at the moment there is something to see or do whether on the streets, in the piazzas or in bars and restaurants. You just have to look for it. It is great to see Scalea alive as it is quite a sleepy town outside of the summer, which I am not complaining about, there is a big part of me to have the town all to ourselves again.

On the same day as the procession there was the partial lunar eclipse. We had a great view from our terrace and perfect clear skies. Although I do not have the correct equipment to take photos of said event, I always give it a go and basically fail.

Also, we have met such a variety of people. They come here for holidays, from England, Republic of Ireland, America, Russia, Australia all over basically, as well as other parts of Italy. We went to a trattoria called Antica Trattoria A ‘Taverna which had just reopened for the summer, with a few people and had a great time. Their white wine looked a little suspect as it wasn’t very er… white but we were told it is naturally homemade and unfiltered. I stuck to the red, John enjoyed it, but he got pretty drunk. He couldn’t walk straight! It is the first time ever I have seen him noticeably drunk, he’s usually just very chatty. It must have been very potent. Oops!

We now have a new ceramic sign for our apartment! There is a woman who makes bespoke signs, plates and all sorts in the Centro Storico called CeramicArt Scalea, so we commissioned a sign for our house. We love it. She is so friendly and talented. She is on Facebook https://www.facebook.com/ceramicArtScalea and Instagram @ceramicart_scalea if you are interested. 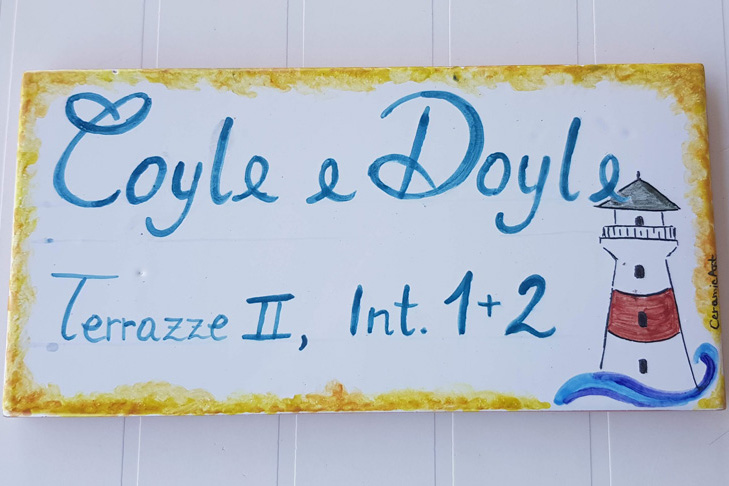 I wish there were more of that in the old town. There are bars, restaurants and the ancient buildings themselves, but more artists shops or studios would make it amazing. Maybe in time, someone will invest.

A little marine museum near the bottom of the old town has reopened and contains items to do with the marine life of the area. There are scenes and items that are hand made by the people in the shop/museum. It is fascinating to look around, it is so small it takes no time at all. 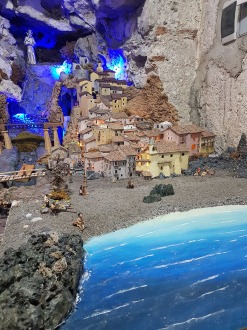 We are struggling with the language, but we are slowly getting better, I think. Until we can attend free Itailian lessons in September, we decided to get a satellite box to immerse ourselves in the language a bit. We already have a satellite dish that the previous owner left behind so we purchased a box with a Tivu card to see free to view channels. There are so many channels available it is crazy. So, I will let you know how we get on with that.

We will have visitors!

So basically, we are enjoying the hot sunshine and so far, having a nice time. Also, we found out that we have our best friends coming to visit in October yippee!! Very much looking forward to seeing Sal and Steve again. And we will have a visit from John’s work friend Evan and his girlfriend Dee in September, again lovely to see that people like us so much to come all this way.

So that is July, I will update August by the end of August, honest. I get confused, never mind you. I can already say that we visit San Giorgio Albanese again and the crowds are coming down from Naples for their August holidays. We’ll see how we and Scalea cope with that as people have already left to avoid it all.

Moved to Calabria in December 2018, going through our life month by month. It's an interesting life View all posts by thecalabriandream

One thought on “Summer in Scalea”

View of Scalea from Baia del Carpino
It's a cat's life
Sunset in San Nicola Arcella
Rusty fence
From the other day.
A very adult trifle I made for @johncxx birthday yesterday. Saturated with limoncello.
Loading Comments...
Comment
×
<span>%d</span> bloggers like this: